Gawain and the Green Knight – Evaluation

Posted on September 13, 2013 | Comments Off on Gawain and the Green Knight – Evaluation

From the 23 May to 16 July 2013 the Gawain and the Green Knight project took place, partly funded by the Clore Foundation.  Below are extracts from David Smith’s evaluation.

“I feel I enjoyed every bit of the experience.”   Dylan

–          Roughlee, a rural primary school with 27 pupils in the whole school.  All the children were included in the programme. 2 teachers + 2 classroom assistants.

Five preparation days were shared between the practitioners.  Eleven practitioner days were spent in school workshops or working with children in the country park at Wycoller.   The project concluded with a celebration day in the Park where children retold the narrative through storytelling, poetry, song and tapestry.

Aim 1: to widen children’s experience of reading and understanding of alliterative verse; offer development of vocabulary and language in their writing and speaking and listening skills

“I’ve learnt to be more imaginative about storytelling.  I’ve had more ideas for my stories.”      Melissa

The practitioners were briefed from the beginning of the project that the development of children’s language was to underpin the programme.  This was particularly necessary for the children from Whitefield for whom English is a second language.  Children were meeting the narrative poem Gawain and the Green Knight for the first time – an experience of literature of the highest quality.

Evidence of success can be found in the alternative Gawain poem created collaboratively by the children.  Its heroes are five children on a quest to find their parents frozen by the wicked witch, Victoria.  This alternative poem reveals a real understanding of how alliteration works, the picaresque tradition in literature and a high quality response to the original:

So that carriages skid and people plunge

And in the ice

There is also evidence of a feeling for how rhythm works in poetry which is seen in their rhetorical use of repetition.  These are quite sophisticated techniques for young children to have grasped:

But when they tried to break it, it wouldn’t crack.

When they tried to smash it, it wouldn’t budge.

And when they tried to roast it whole

It bounced back out of the fire again.

Teachers were introduced to new ways of presenting literature and strategies for creative writing in their own classrooms; techniques which they agreed they will be able replicate in future terms applying them to other work.

Teachers planned and delivered the programme in an effective partnership with the practitioners.  They saw how a storyteller was able to abridge and rework more difficult parts of the text.  They worked with him to check children’s understanding with children working collaboratively to dramatise pieces of text.  Our musician showed how simple percussion instruments – all available in school – could be used to evoke the mood and rhythm of the poem with the children composing which sounds were most appropriate for the moment.  She also showed how the understanding of alliteration could be reinforced through the composition of new songs.

Our textile artist showed how a simple felt tapestry with moveable figures could be used as a storyboarding technique.  Teachers grasped how this was relevant both for checking understanding of the narrative but also as a tool for the development of ideas for creative writing.

Taking the children to a country park with a ruined hall was inspirational for the generation of enthusiasm, the creation of ideas and the development of language.

“The visits to Wycoller were brilliant!   We heard magic sounds, saw creepy ruins and smelled different smells which made me feel that the story we made was real.”    Imogen

Children were encouraged to see the visits as an exploration, as an adventure, as a journey just like the one taken by Gawain!

“I felt amazed when we went to Wycoller because we were able to go in the ruins, up to the forest, over a “one slab of stone” bridge and walked under the willow arch.  Working with Toad I’ve learnt to make better characters for my stories.”         Francesca

There are pieces of the children’s poem which allow you to identify exactly where in Wycoller the ideas have come from.  A clear description of the clapper bridge over the river:

On the edge of a stream

Where one long stone crossed the river

One long rock over

The following all relate directly to things the children experienced in the country park:

A delicate duckling with a sore leg limped ahead of them

(she) …stretches her fingers, with nails

Even the trees are mean,

And grabbing at the children as they pass,

On branches as strong as a giant’s arms.

They hear water crashing against the rocks,

A big black slug slithers through the long grass,

Ducks are paddling and quacking in the stream,

And they can smell

Tall grass by the stream

Yet, at the same time, the children’s home experience was valued in the collection of ideas:

And a pie, their favourite pie

With apple pie for afters

Aim 3: to establish a model of good practice for teaching and      learning in school. 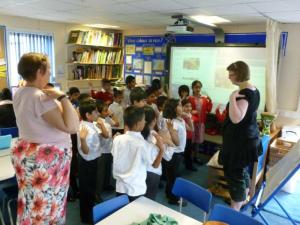 Teachers agreed that they had worked with a good model of sustainable practice which had the following ingredients:

–          accepting and developing probing questioning as a means of developing ideas

–          developing collaborative learning as a ‘practice’ for children to develop, expand and test ideas and try out newly acquired language.

Evidence of impact of the project on  children participating

“I think the Sir Gawain Project has helped me to be more confident and has made me more responsible in what I do.”   Lilly

The programme offered children from totally different backgrounds the opportunity not only to mix socially as they picnicked together but to work together in a number of collaborative and constructive ways.

“The Sir Gawain and the Green Knight Project has made me read aloud more.   The next time when I do a project I’ll be really confident at reading to other people.”  Luke

They created new stories, shared and tested ideas through discussion, drama, music-making.  Teachers reported increased motivation for learning as they encountered new practitioners and new strategies for learning. Evidence for this is found not only in the quality of the work produced, the high quality support provided by teachers at the end of a long hot term but in the children wanting their families to make the journey to attend the final celebration in the country park.

“I learnt lots of interesting things from the Sir Gawain and the Green Knight Project –  about musical instruments that sounded like creatures, instruments I hadn’t heard before.  I’m more confident now I have done all the things we did together.”    George.

Evidence  of the impact of the project on the whole school

Most productive was the school’s introduction to different ways of working.  Working closely in planning and delivery with another school was a new and valued experience for both:

“The project helped me take part with other schools.”   Skye

Teachers in both schools were impressed by what can be achieved through partnership working: teachers and practitioner planning and delivering activity together.  They valued the involvement of a project manager and a lead artist to take some of the administrative burden away from them:  researching artists, contracting, negotiating and booking venues and transport, budget management, evaluation etc….

The programme was constructed so that teachers can introduce many of its components into the school curriculum in the future.  The musician and artist showed how a story board of composed songs or a tapestry recording of the children’s response to literature can test their understanding of text; provide a catalyst for creative writing as well as a legacy for future work.

The project also allowed both schools to use valuable resources outside the school grounds for learning:  Wycoller Country Park with its dedicated educational facilities, Lancashire County Council’s Countryside Services and in particular, access to park rangers.

In the autumn term both schools will report back to their whole staff and to the individual school networks they belong to describing the success and impact of the work.

“Sir Gawain and the Green Knight was a great story.   I enjoyed making music.

When we visited Wycoller I enjoyed exploring the ruins.

Comments Off on Gawain and the Green Knight – Evaluation